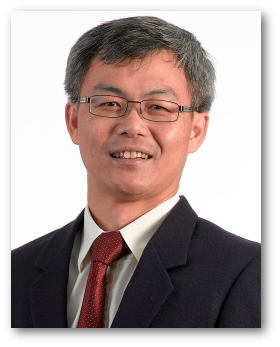 Dr Keck-Voon LING is currently an Associate Professor and was the Deputy Head of the
Control and Automation Division (2006-2008) in the School of Electrical and Electronic
Engineering, Nanyang Technological University (NTU), Singapore. He graduated from the
National University of Singapore and Oxford University, UK in 1988 and 1992 respectively. He
was awarded the Commonwealth Fellowship (2001) and the Tan Chin Tuan Fellowship (2006)
and was a visiting researcher at the Department of Engineering, University of Cambridge, in
2001 and 2006. He also held a joint appointment as a senior scientist at the Singapore Institute
of Manufacturing Technology (SIMTech) from 2005-2010. From 2006-2010, Dr Ling was the
Programme Manager of the A*STAR Embedded and Hybrid Systems II (EHS-II) Research
Programme, overseeing the R&D effort in Body Sensor Networks for Healthcare Applications.
He was the general chair of the International Conference on Body Sensor Networks held in
June 2010 in Singapore. He was a visiting by-fellow at the Churchill College, Cambridge
University in 2016.
Dr LING’s research interests include Model Predictive Control (MPC), its embedded
implementation on reconfigurable computing platforms and applications. In recently years, he
is applying his research in control and estimation to multi-band GNSS software receiver
research, navigation and positioning applications, as well as smart grid and power systems
applications.