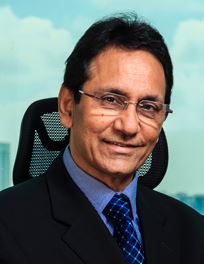 Prof Venkatesan was a Principal Investigator for the eCO2EP project until late in 2019.

Prof Venkatesan has been a physicist and manager for 17 years with Bell Labs and Bellcore and in the last 17 years has been with the Center for Superconductivity Research at University of Maryland, College Park.

He founded the Surface Center at Rutgers University where he was a Professor for about five years (85-90). Most recently he was leading an effort in Oxide Electronics at UMD. Since 2008 he is directing the NanoCore Research Center at the National University of Singapore. He pioneered the Pulsed Laser deposition process and was the first to elucidate the intricacies of the process to make this a reproducible laboratory technique for the growth of high quality multi-component oxide thin films. He is an ISI highly cited Physicist (>20,000 citations ranked 66) has over 450 papers and 27 patents in the area of oxides involving superconductors, magnetic and optical materials. He is a Fellow of the American Physical society, World Innovation Forum, winner of the Bellcore award of excellence and the UMD graduate Board award. He was a member of the Physics Policy Committee and is the founding member of the International Oxide Electronics Workshop.

In 1989 he founded Neocera, a company specialising in pulsed laser and electron deposition equipments and also commercialized the HTS SQUID based magnetic microscope MAGMA for semiconductor failure analysis used by virtually all leading semiconductor manufacturers in the world today. A technology based on the scanning microwave near field microscope for silicon low K metrology was commercialised and sold to Solid State Measurements (SSM). He has helped many of his students and post docs in starting companies and 8 of them have started small companies or are holding executive positions in entrepreneurial ventures. He has raised venture capital money over several rounds and has been on the advisory board of the New Market Venture fund of UMD Dingman Center, the UMD incubator and has been involved in promoting entrepreneurship among young researchers. He holds a PhD from the University of New York and Bell Laboratories, USA and an MSc and a BSc (Honours) from the Indian Institute of Technology in Kanpur, India.