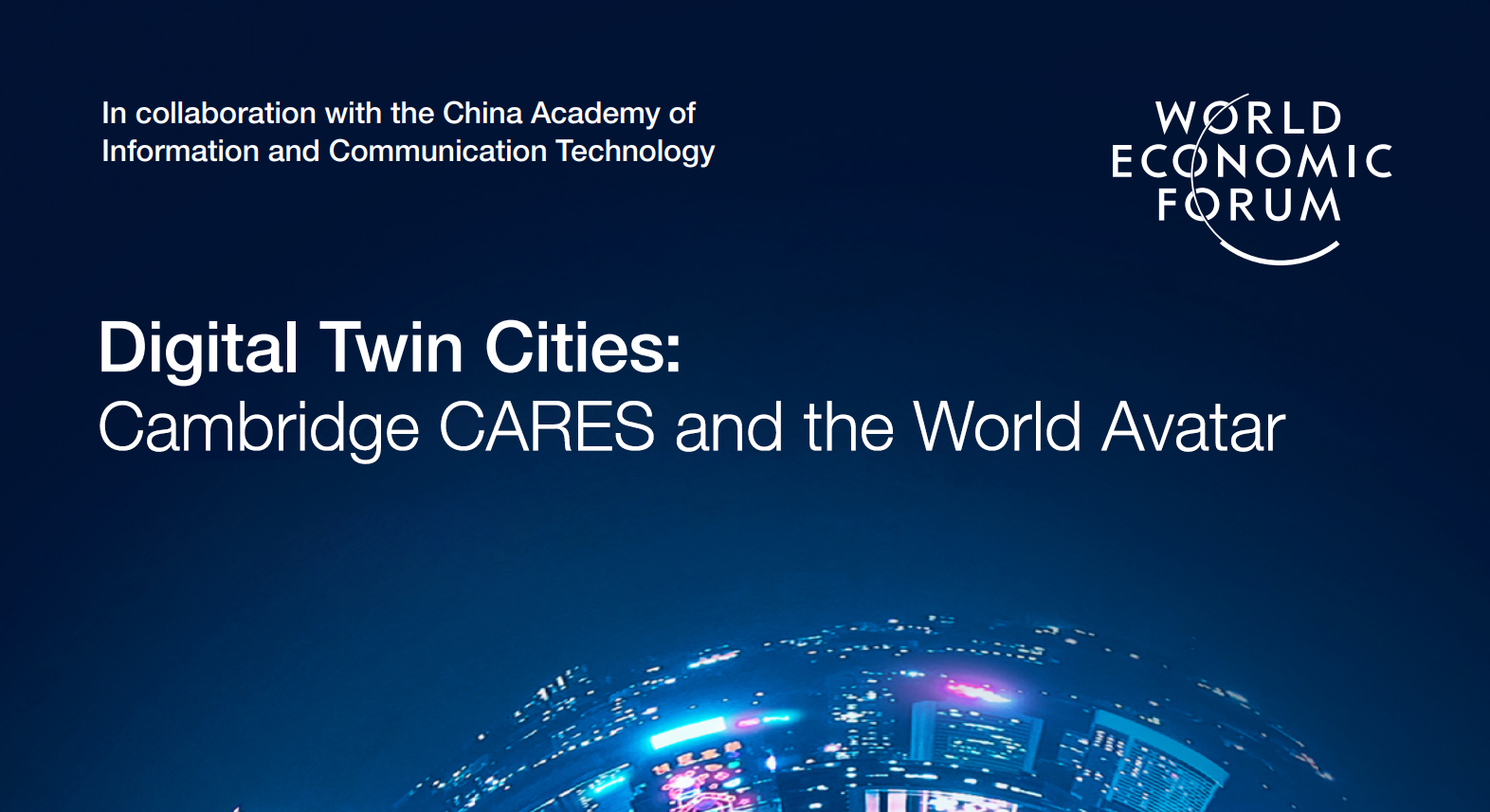 The World Avatar project has been selected for the World Economic Forum (WEF)’s list of Global Use Cases as part of its Global Digital Twin Cities initiative.

The initiative offers a potential solution for policymakers worldwide to improve city governance and create a conducive urban ecosystem for industries and people. It is a collaboration between the WEF’s Urban Transformation Platform, The China Academy of Information and Communication Technology (CAICT), and other key stakeholders.

At the beginning of 2021, the WEF and the CAICT launched the three-year initiative to make digital twin technology accessible to the public, promote social equity and inclusiveness, help cities achieve digital and low-carbon transformation, and jointly shape the future of digital twin city development. Ultimately, WEF hopes to render cities more inclusive, sustainable, and liveable through these efforts.

CARES and The World Avatar

CARES first started work on digital twins with the C4T JPS programme. The team started by creating an overarching digital twin of Singapore’s chemical industries by combining process and economic models with the latest ideas from semantic web technologies and Industry 4.0 to test how various scenarios affect the real world.

While JPS was a breakthrough for reducing the carbon footprint of industrial parks, it also opened the door to a much more ambitious project: The World Avatar.

The World Avatar and the WEF

The World Avatar (TWA) project perfectly fits as an example for this WEF initiative. TWA represents the digital world using a dynamic knowledge graph containing concepts and data describing the world. TWA simulates the world’s behaviour with an ecosystem of autonomous computational agents that update the concepts and data so that the digital world remains current in time.

In this manner, it is possible to create digital twins that can describe the behaviour of any complex system and can make data-driven decisions about how to optimise the systems.

Uses of The World Avatar

TWA has a representation of the CARES lab in Singapore. Data about the building, laboratory layout, and the locations of sensors are all represented as part of TWA’s knowledge graph. Agents then use real-time data about the ambient humidity and outdoor air temperature to achieve a specified temperature in the lab, and flammable chemicals can be monitored by incorporating sensors into the safety cabinet in which they are stored.

TWA also contains a description of the UK’s electrical power and gas transmission systems. This gives geospatial details of infrastructure and captures relationships between different infrastructure elements, climate observations, and live data feeds describing gas flow into the transmission system. TWA leveraged disparate information to investigate the hypothetical outcome of switching from gas heating to heat pumps. CARES released a paper outlining results that while the complete switch would reduce the UK’s total carbon dioxide emissions by ~10% it would also exacerbate fuel poverty in colder parts of the country. In this way, TWA can support local policymaking.

Another fitting application of TWA is the Climate Resilience Demonstrator (CReDo), developed by CARES’ collaborator CMCL Innovations as part of the UK’s National Digital Twin programme. CMCL applied ideas from TWA to create a digital twin that integrated data describing assets from the water, energy, and telecom industries. Data from flood simulations were then combined with asset data to model the potential cascade of failures through the combined asset network in future flood scenarios for cities.

TWA is much more than just these examples, it can create digital twins that can describe the behaviour of any complex system and can make data-driven decisions about how to optimise the systems.

WEF’s Global Digital Twin Cities initiative has recognised the value of this approach, and by adding CARES and TWA to its Global Use Cases, it stands as an example of how to reach true interoperability between diverse sectors.

A new century of crises: Creating an improved, scalable platform for nanomaterials